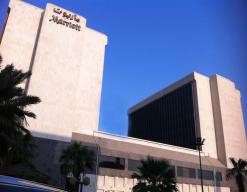 SIMCO was hired by Inspectech to conduct concrete characterization of different elements at the Marriott Hotel in Jeddah. SIMCO was to provide a durability analysis and recommendations for the repairs of the raft foundations, columns, and swimming pool area.

Field observations were initially conducted and the areas showed signs of advanced degradation due to lack of maintenance and poor construction techniques including, cracking, corrosion, efflorescence, and water intrusion.

To conduct the full analysis, a total of sixteen cores were extracted from different reinforced concrete elements. Eight cores were extracted from Raft Foundations (2 locations), four from Columns (4 different columns) and four from Swimming Pool Area (from 3 different locations). Immediately after being extracted, each core was identified by Inspectech. They were then shipped to SIMCO’s laboratory for laboratory investigation.

With the extracted cores, a comprehensive laboratory testing program was performed using ASTM testing standards and specialized testing protocols and procedures including:

The raft foundation showed an excessive amount of efflorescence and that previous concrete repairs bonded poorly to the original concrete. The original concrete was carbonated at the interface to a significant depth indicating improper preparation before repair application. Joint between original and repair concretes were observed.

Modeling the service-life for the raft foundation focused on the 35 years of exposure. SIMCO’s simulations indicated that the top reinforcement in the raft was in a state to initiate corrosion. This implies that rebar corrosion has most likely already started for those structural elements. This is mainly due to the poor properties of the concrete.

Laboratory results showed that a poor quality concrete was used for the columns and chloride profiles were relatively constant around the value of 0.5g/kg, which is considered to be the chloride content at which there is a risk of corrosion initiation. Based on this affirmation, results indicated that the columns were not exposed to external chloride.

For modeling, the dominant degradation at the moment in the columns appears to be carbonation and it is not severe enough to cause risk of carbonation-induced corrosion until 100 years since year of construction. Therefore, no repair was needed.

The core extraction showed the slab was poorly constructed and the laboratory results revealed that the slab was already heavily contaminated with chlorides. The slab already showed signs of delamination and corrosion of the reinforcing steel.

Based on the results, only two options appear to be viable for the swimming pool.