The basement of a tower in Dubai 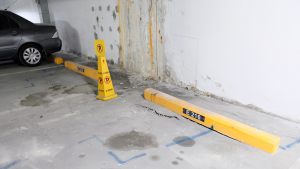 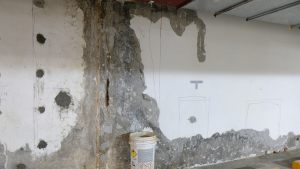 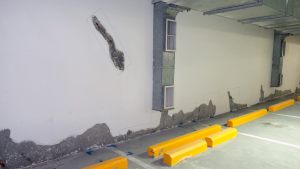 This tower in Dubai was completed in 2010. Since then, various water intrusions had been reported in the basement ‘envelope’, mostly focused on failed construction or expansion joints. By 2015, some areas of corroding steel and PT tendons were already visible, where cover concrete had cracked and, in some cases, delaminated and spalled off. Hence, in 2015, Structural Technologies were appointed to carry out a condition assessment to understand the extent of deterioration in the existing structure at each of the three (3) basement levels B1, B2 and B3.

The Structural Technologies report concluded that there were several structural and durability related issues in the basements, including restraint cracking, ingress of groundwater through failed joints, low concrete cover to rebar, etc.; these factors, working together, had caused chloride/carbonation induced corrosion of rebar and post-tensioned tendons in localized areas of corrosion and delamination of concrete. Such corrosion was noted to be prevalent on steel reinforcement in multiple locations, particularly on the raft slab in Basement 3. The recommended repairs included corrosion-related repairs and structural repairs. While corrosion-related repairs were concerned with repairing cracked, delaminated, and spalled areas of concrete and mitigating the corrosion process, structural repairs were concerned with reducing the impact of structural cracks in the slabs and enhancing the capacity of the existing reinforced concrete elements.

It is understood that CCL was appointed to carry out only the structural repairs in the following year and ad hoc waterproofing repairs have been carried out since then. However, no corrosion-related repairs have been executed so far.

SIMCO was commissioned to carry out a condition assessment of affected elements in the basement and Podium and to provide recommendations for a cost-effective repair solution. Various water intrusions through expansion joints, construction joint, expansion joints, and cracks had been reported. The walls and raft of basement slab were also reportedly exhibiting signs of possible corrosion of reinforcement.

SIMCO performed the investigation at selected representative individual locations using distinct types of nondestructive and destructive testing. It is SIMCO’s view that this detailed Condition Assessment of the reinforced concrete elements would help the Client to establish the integrity of the structure and the extent of deterioration/damage, and to establish whether the proposed repair option is technically and economically viable.

The main objective of this study was to;

This report summarizes the findings of the visual inspection, the laboratory test results obtained from the concrete testing program, discussion and conclusions on the root cause and deterioration mechanisms and finally the recommendations for repair of the subject areas.

It was envisaged that this project will be executed in 2 Stages:

Stage 1. Condition Assessment and Scope Determination (This Report)
Stage 2. Optimization of Design-Build Scope for repair works (to be completed later)

Provide recommendations for the most efficient and maintenance options
Perform.